LFC'sTeam of Macs and the Scottish Influence

Every Liverpool fan knows that Liverpool Football Club has a strong connection with Scotland. Bill Shankly forged the modern Liverpool and Kenny Dalglish was probably Liverpool's greatest player. Liverpool's most successful period during the 1960s, 70s and  80s (when 13 titles were won) was shaped by Scots.

But this Scottish influence goes way back, to Liverpool's first season. Liverpool were literally made in Scotland. It is unlikely that Liverpool would have won their first league title in 1900-01 without the Scottish contingent.

The First Team of Macs

In my article about Liverpool's creation I described the situation in 1892 following an almighty bust up with Everton where John Houlding, Liverpool's founder, was left with the Anfield stadium and no team to play in it!

John McKenna travelled to Scotland to find talented players for the new Liverpool team. Heading north in search of players wasn't a radical new approach. Preston North End's 'invincibles' had won the first ever league title in 1888 with several Scots in the team.

In 1892 Scotland didn't have a professional football league but it did have many skilful footballers with limited job opportunities. And Liverpool FC had an ambitious owner who was determined to build a team that would challenge for the title. It isn't a surprise that so many Scots took up McKenna's job offer. 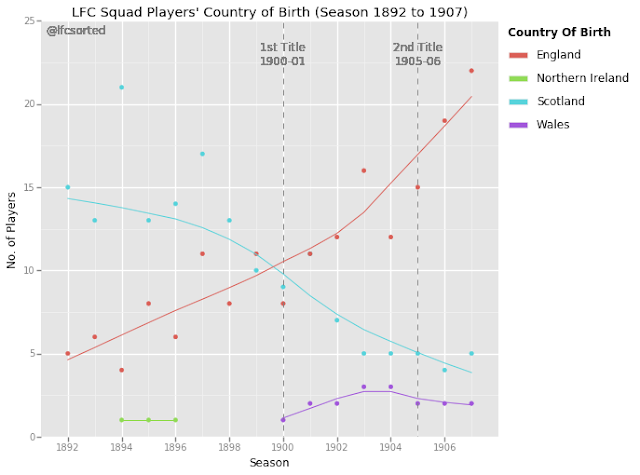 In their first season in 1892-93 Liverpool's squad was 75% Scottish. In the away match against Blackpool, 9 of Liverpool's starting 11 were Scottish, the match was billed as 'Lancashire against Scotland'. Liverpool were known as the 'team of Macs'.

When Tom Watson was head-hunted for manager by Liverpool in 1895 he'd already won the league title with Sunderland 3 times. Watson strengthened the Liverpool team with additional young Scottish players, just as he had at Sunderland.

The Scots were in the majority in the Liverpool dressing room until around 1900. The Liverpool squad that won the first title in 1900-01 season was 50% Scottish. Alex Raisbeck (also known as 'Alexander the great') was the captain of the first two title winning teams and Liverpool's first superstar. Raisbeck - as with all great Liverpool captains - said that he enjoyed beating Everton the most. 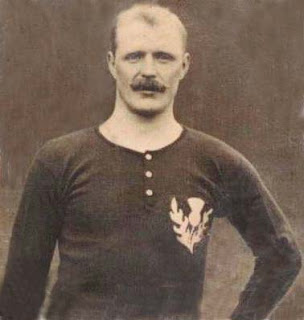 Looking back over Raisbeck's 11 years at Anfield, Victor Hall described him eloquently in the Echo:


"Who that ever saw him play can forget the unmatchable enthusiasm he displayed in the sheer love of the game. He not only put body and dash into individual games he played, but more importantly he helped to create the soul, that inward sacred fire of zeal without which no club can thrive and live… Tall, lithe, sinuous, and yet gifted with muscular and physical development beyond the ordinary… With a perfect blending of the qualities that to make a really great player!"

The graph below shows the number of Liverpool squad players over the whole of Liverpool's existence, from season 1892-93 to 2015-16. 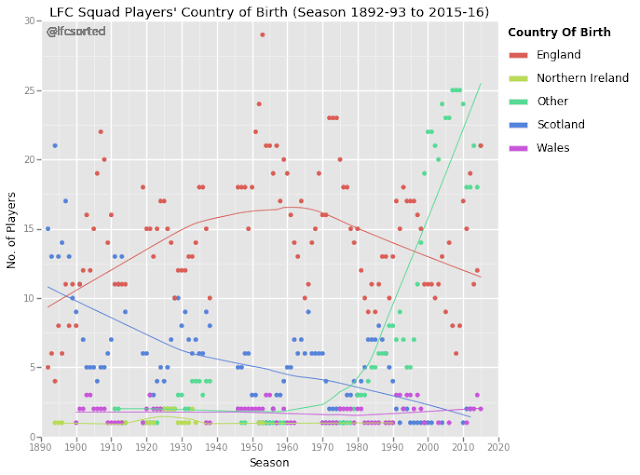 The trend lines tell the story of the globalisation of the Liverpool squad, with the green 'Other' line - showing the trend in squad players from countries outside the UK - growing steadily starting in the 1980s and then heading off the chart.

You can also see the slow decline of the Scottish influence. However, if you look closely at the blue dots you can see two important modern(ish) Scottish resurgences, one in the 1960s and one in the 1980s. Let's take a closer look at these two resurgences.

The graph below shows the Shankly years from 1959 to 1974 when the foundations of modern Liverpool were laid down. Liverpool won 3 league titles during this period. 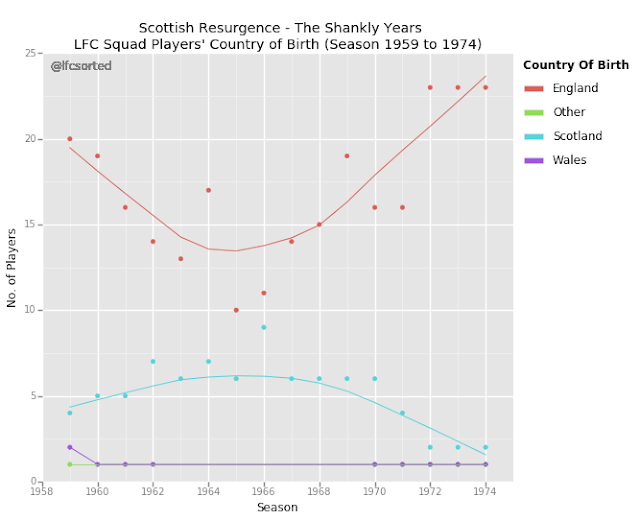 Shankly's first season was Billy Liddell's last full season. Liddell ('King Billy') was one of the Scottish greats. It was a shame that Shankly didn't benefit from King Billy in his prime. Shankly said of Liddell,


“He had everything. He was fast, powerful, shot with either foot and his headers were like blasts from a gun. On top of all that he was as hard as granite. What a player! He was so strong – and he took a nineteen-inch collar shirt!"

The graphs below shows the Paisley, Fagan and Dalglish years from 1974 to 1991. And what years they were, with 10 league titles! 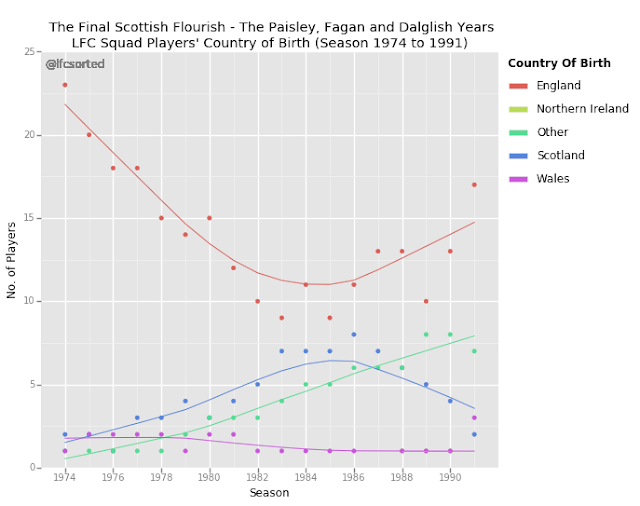 That final Scottish flourish peaked around 1986. The quality of the Scots in the Liverpool squads was very high. The Scottish legends included Kenny Dalglish, AlanHansen, Graeme Souness and Steve Nicol.

The graphs below show the LFC Scottish players with the highest number of league appearances and goals.

Billy Liddell has the highest number of league appearances with 492. 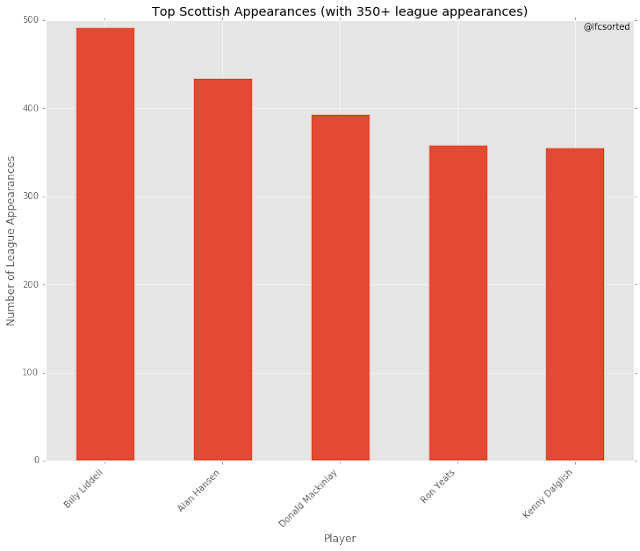 And King Billy is also out in front with 215 league goals, 96 in the top flight. 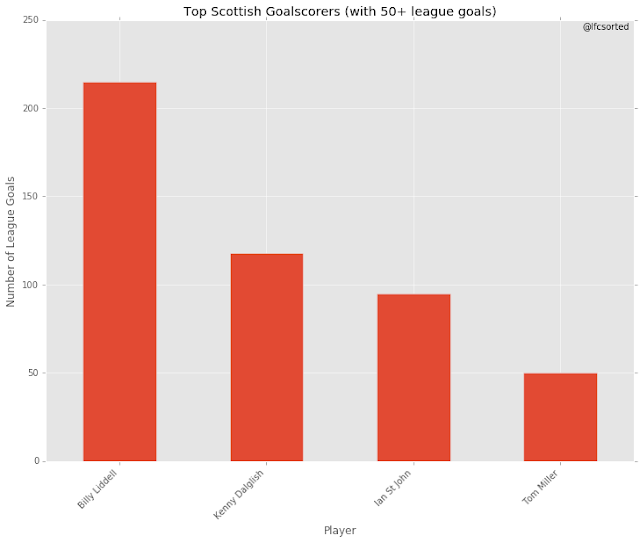 Here is a comparison of those 4 top Scottish goalscorers over their Liverpool career using the LFC Goal Machine. 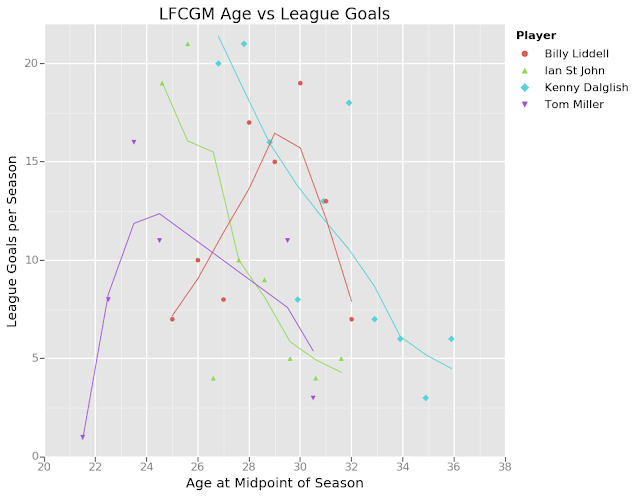 Kenny Dalglish tops this chart, twice achieving over 20 top flight league goals. Dalglish joined Liverpool when he was 26. He'd already scored 112 league goals in 204 games for Celtic; in 2 of his 9 seasons at Celtic he scored over 20 league goals. King Kenny is still Scotland’s most capped player and joint-highest goalscorer.


"Of all the players I have played alongside, managed and coached in more than forty years at Anfield, he is the most talented… Kenny is not only the best individual I have come across, he is the best team member too."

Finally, the graph below shows the percentage of Liverpool's title winning captains by country. 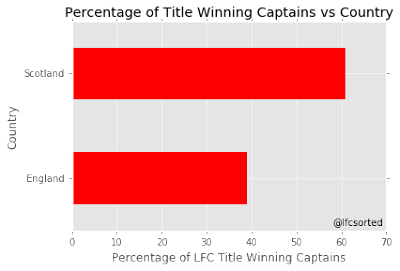 Thanks to the excellent LFChistory.net for the player profiles and base data.


This article was first published on The Tomkins Times on 24th August 2016.
Posted by Terry Dolan at 21:09