Liverpool FC Was Created Over A Pint Of Sparkling Ale

John Houlding's split with Everton FC had been acrimonious. The coup de grass - if you'll excuse the Anfield pun - had taken place 3 days earlier on 12th March 1892 in a packed Sandon Hotel, the club's headquarters and match-day dressing rooms.

George Mahon, his bitter rival on the Everton board, had announced that Houlding's services as club president and Anfield landlord were no longer required. Mahon said that Everton were not prepared to pay Houlding's increased Anfield rent and were moving across Stanley Park to a new ground at Goodison Road. Mahon was literally taking away his ball, the team and the supporters.

Houlding, the Anfield owner, was left with a good pitch, a decent stand, a hefty loan and no football team. When Mahon said he'd be back to dismantle Anfield's wooden stand and move it to the new ground at Goodison, Houlding had lost his cool and thrown him out the Sandon. Well, this was his right as he also owned the pub and the Houlding's Brewery Company that supplied its fine sparkling ales!

Houlding was an ambitious self-made businessman and local Tory council member. He wanted a good return on his investments but he also craved sporting success. So what should he do? Should he sell up and give up on his football business? He'd have no trouble finding a buyer for the Anfield land. Or should he try and realise his dream? He'd thought about nothing else for the last few days. He'd made his decision…


Houlding's Beacon Ale, the only alcoholic beverage sold at
Anfield in the early days and John Houlding,
founder of Liverpool FC

Houlding closed the door of the Sandon's private room behind him, walked to the table and sat down in front of the two men and the tray of Houlding's sparkling ales. With a look of defiance he held his head up high and said, "I want you to help me build a new football team that will have its home here at Anfield. I want this team to be the best in England and to win the League year after year." Houlding winked and added, "And of course we'll beat the toffees for a laugh. Will you join me?"

Both William Barclay and John McKenna were staunch supporters of Houlding. They believed that many of the Everton board members had acted dishonourably in expelling Houlding, a man who had helped Everton to survive when the club were forced to leave their previous ground. Barclay and McKenna were sure that Everton would not have won the League title without his help.

Houlding's plan to create a new football  club at Anfield with the aim of being the best in the land was just what they were hoping for. But they knew it wasn't going to be easy: Everton had a very good team and they had won the League just a year ago - the first title won at Anfield! And the First Division was getting stronger with each year.

Barclay spoke first, "Of course we'll join you John. I've been thinking about a name. We are Liverpool Country, proud and independent. Let's call this team Liverpool FC." McKenna  nodded, shifted forward in his seat and added, in his Northern Irish lilt, "I know where we'll find a talented group of players that will challenge for the League title - we'll head north, to Scotland."

Houlding smiled and raised his glass, "To Liverpool FC and their success! Go find the best player for every position - build a team of Macs." 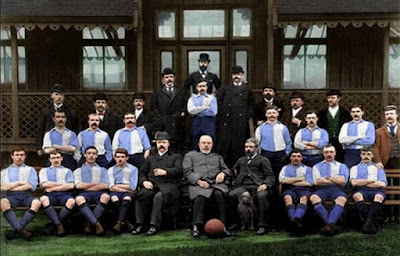 Early photo of Liverpool's first team including, in the front row,
John Houlding (with the ball) and John McKenna (with the hat).
Liverpool played in blue and white from 1892-1896.

That is, of course, a fictitious account of Liverpool's creation based loosely on the known facts. Here is a summary of what happened after that historic meeting on 15th March 1892…

Barclay and McKenna built a new Liverpool FC team from scratch - funded with a generous loan of £500 from Houlding - with most of the new, talented players coming from Scotland. Liverpool's application to join the Football League in 1892 was rejected following an administrative error.

Liverpool therefore started in the Lancashire League in season 1892-93 and won it just ahead of Blackpool on goal average. The attendance at the first league game at Anfield was 300. The match against Blackpool that season was described in newspapers as 'Lancashire against Scotland', with Liverpool starting 9 Scottish players. Liverpool were known as 'the team of Macs' because of their heavy Scottish influence.

The first derby between Everton and Liverpool took place in the Liverpool Senior Cup on 22nd of April 1893 on Bootle's ground in front of 10,000 people. Liverpool won 1-0 in a 'very competitive' game. I bet John Houlding, the Liverpool team and the new fans  enjoyed a few jars of sparkling ale that evening!

Liverpool joined the Football League Second Division in season 1893-94 and won it by 8 points. Liverpool were promoted to the elite First Division in 1894 but their stay was short-lived and they were relegated. In 1895-96 'honest' John McKenna took over formally as manager and Liverpool won the Second Division for a second time.

In the summer of 1896 McKenna, with Houlding's backing, made Tom Watson a financial offer he couldn't refuse and Watson became the highest paid manager in the Football League. Watson, a Geordie, was already the most successful manager having won the First Division title 3 times in 4 years with Sunderland.

Watson went north of the border to find more young Scottish talent to improve the Liverpool first team, just as he had with Sunderland. In season 1896-97 Liverpool became established as a First Division team, finishing 5th. In the next 3 seasons Liverpool finished 9th, 2nd and 10th.

In season 1900-01 Liverpool won their first League title, just 8 years after joining the Football League. The Reds finished the season with an impressive 12 match unbeaten run. The attendance at the final league game at Anfield was 20,000.


Tom Watson, manager of the first Liverpool team to win the League title,
and the League Championship medal

Tom Watson won a second League title in season 1905-06 and went on to become Liverpool's longest serving manager with 19 years of service. He was also said to have a great singing voice, but that is another story.


This article was first published on The Tomkins Times on 9th August 2016.
Posted by Terry Dolan at 18:29