I've developed a simple web app called The LFC Goal Machine that plots a player's age against the league goals that the player scored in a top level season. The app knows about every LFC player who scored a top level league goal in more than one season, from 1894-95 to 2014-15. You can use the app to compare players across different seasons and eras. Simply select one or more players and take a look at their graph. You can play with the lfcgm app at lfcgm.lfcsorted.com.

To whet your appetite I've selected some graphs from the app that I found interesting. I've been watching Liverpool since the early 1970s. The graphs show players from before my time, such as the record-breaking Gordon Hodgson who was born in South Africa in 1904. The app's data is sourced from lfchistory.net and you can find out more about the players listed at www.lfchistory.net/players.

Early Riser
Robbie Fowler is the only player in Liverpool's illustrious history to score 20 or more top level league goals when under 20 years old. In his first three seasons Robbie scored at one of the fastest ever rates, scoring 12, 25 and 28 goals. 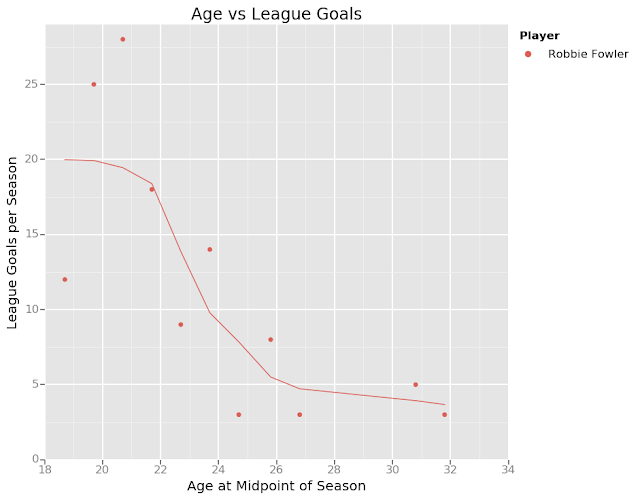 Late Flourish
John Aldridge made his Liverpool debut at 28 and had an extraordinary late flourish, scoring more than 20 league goals in two consecutive seasons. John is one of five players who have scored 20 or more league goals when over 30. The others are Dick Forshaw, Gordon Hodgson, Jack Balmer and Ronald Orr. 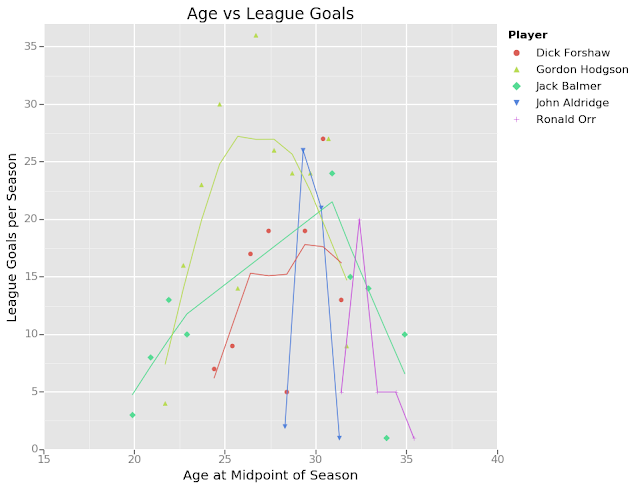 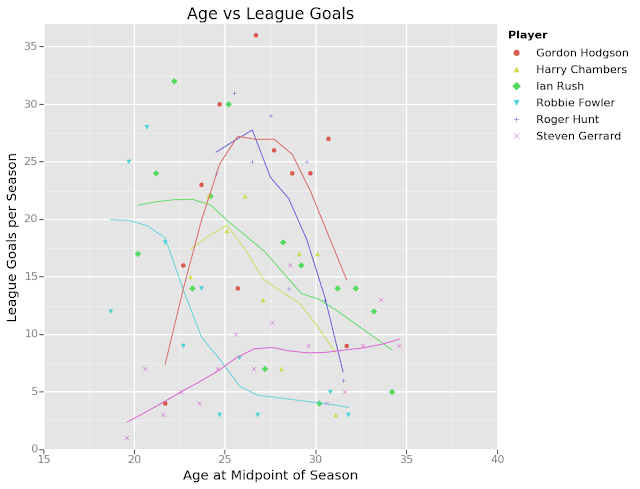 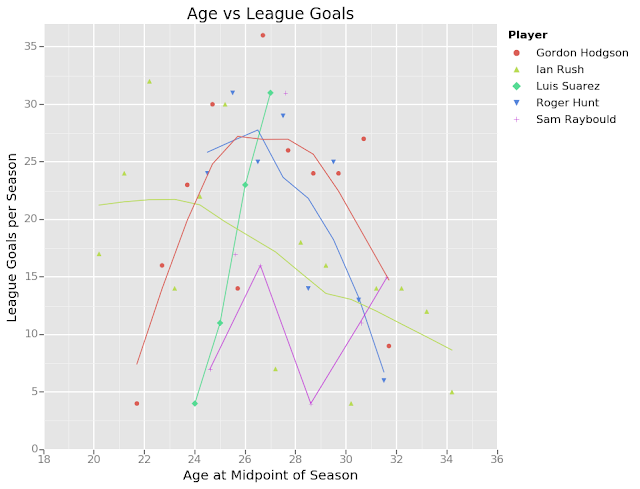 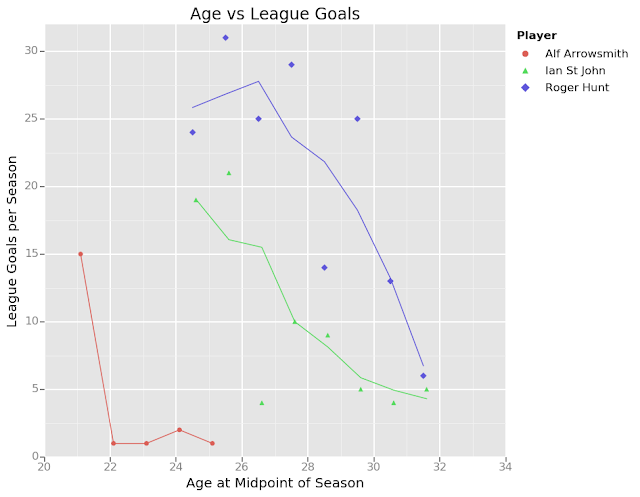 For more about this striking trio see this blog post.

A Striking Duo
There are two striking Liverpool duos who both scored 52 goals. The first partnership was Roger Hunt and Ian St John from the 1963-64 championship side described above. And the second  partnership was Luis Suarez (31 goals, age 27) and Daniel Sturridge (21 goals, age 24) from season 2013-14 when Liverpool came so close to winning the league. 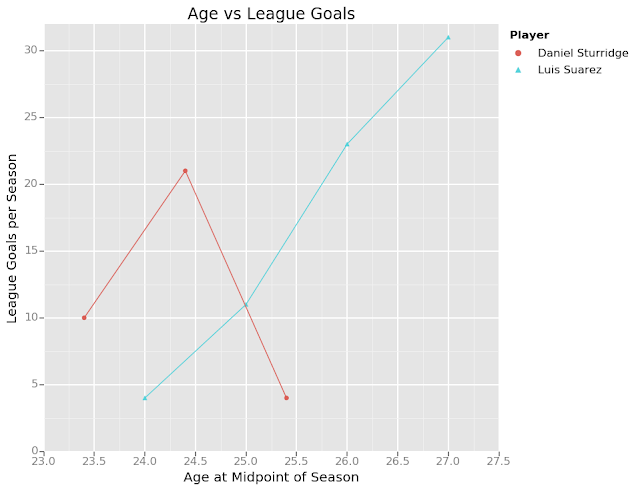 Player Managers
Here is the graph of the Liverpool players who went on to manage the club: Kenny Dalglish (118 top level league goals), Graeme Souness (38), Phil Taylor (32) and Bob Paisley (10). 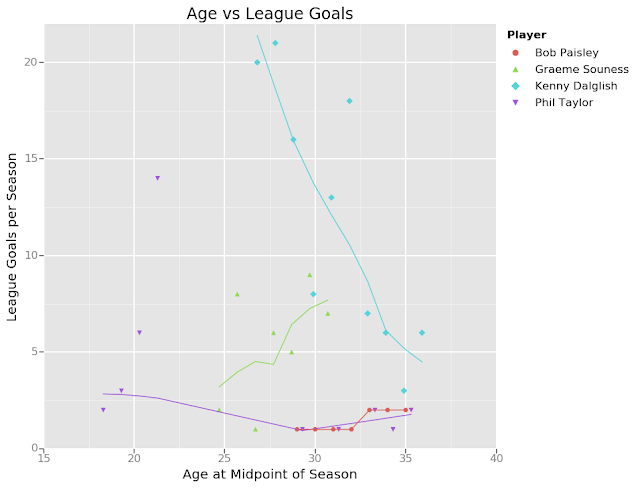 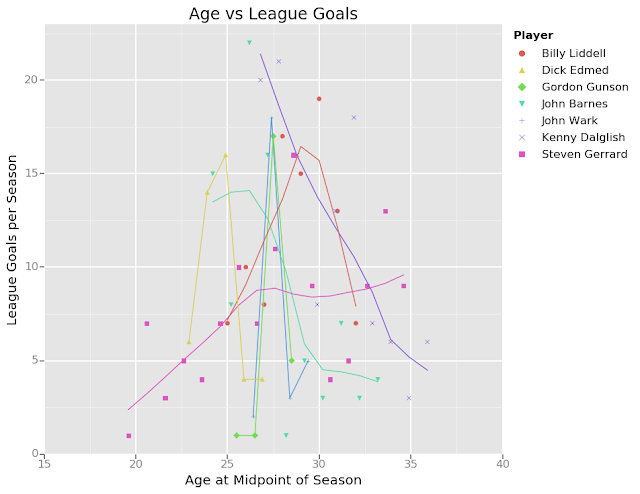 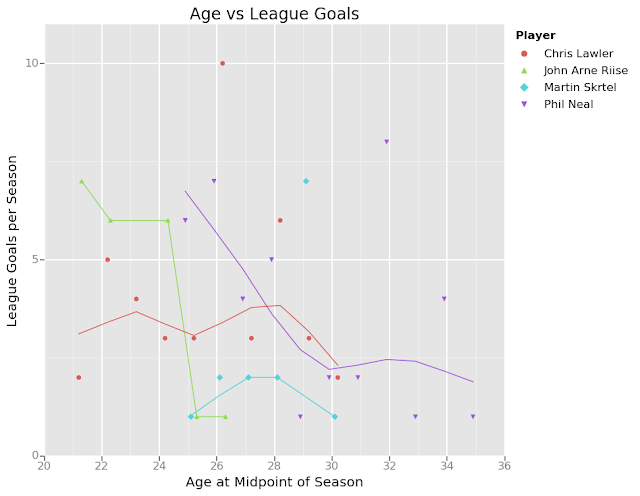 Goals Per Game King
The six players with the best top level league goals per game (GPG) ratio over their Liverpool career* are: 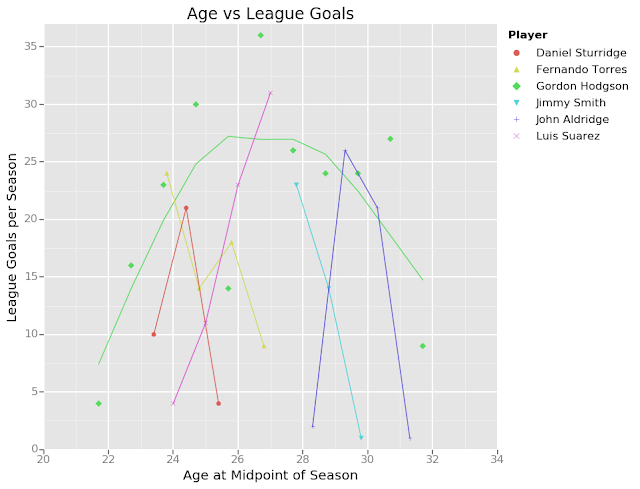 Unfortunately prolific goal scorers are not a guarantee of success. Of all the players listed above only John Aldridge featured in a league title winning side.

These are arguably the most significant goal scorers in Liverpool's history. 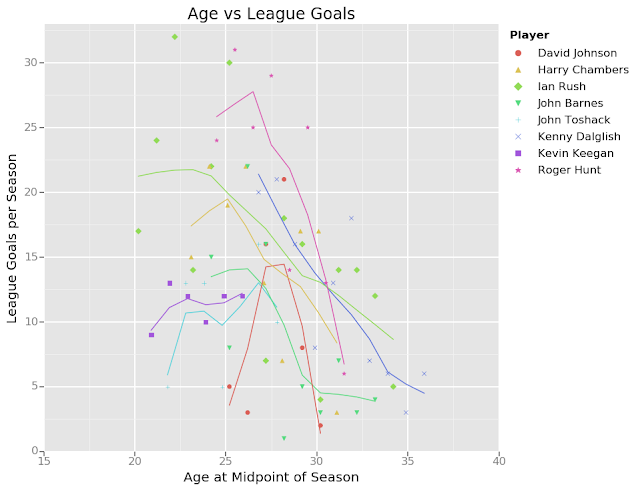 Peak Performance
Gordon Hodgson appears in many of the graphs shown above, so let’s finish with his graph. Gordon has a classic distribution, showing remarkable consistency and with an extraordinary peak in his 26th year. The 36 goals he scored in 1930-31 is the highest Liverpool total in a top level league season. He also holds the record for the highest number of career top level league goals with 233 goals. He made 358 league appearances and has the highest goals per game ratio at 0.651. 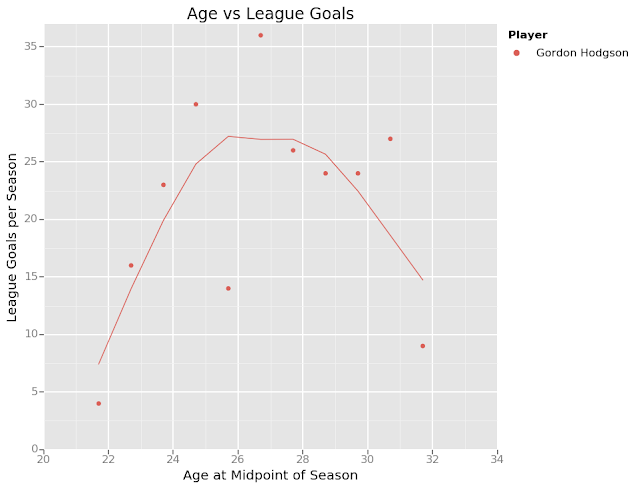 You can find out more about The LFC Goal Machine app and the data analysis on the lfcgm repository on github.

Finally, thanks to Paul Tomkins (@paul_tomkins) who first published the article here on The Tomkins Times on 2nd March 2016.

Update 29th March 2016: The lfcgm repository now includes the source code for both the original python version and the new R version. You can play with the lfcgmR app at https://terrydolan.shinyapps.io/lfcgmR.
Posted by Terry Dolan at 13:20