Meanwhile In A Parallel Universe… 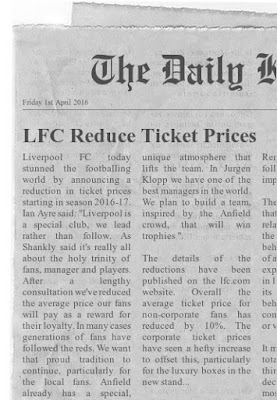 Liverpool FC today  stunned the footballing world by announcing a reduction in ticket prices starting in season 2016-17. Ian Ayre said: "Liverpool is a special club, we lead rather than follow. As Shankly said it's really all about the holy trinity of fans, manager and players. After a lengthy consultation we've reduced the average price our fans will pay as a reward for their loyalty. In many cases generations of fans have followed the reds. We want that proud tradition to continue, particularly for the local fans. Anfield already has a special, unique atmosphere that lifts the team. In Jurgen Klopp we have one of the best managers in the world. We plan to build a team, inspired by the Anfield crowd, that will win trophies ".